dress- Target, sandals- Cynthia Vincent for Target, denim bangles- DIYed, denim bag- Coach
I am in love with the color of this dress. I'd been on the search for the perfect brightly colored summer dress, and I found it at Target. I'm not surprised, Target is freakin' fab. So I made a decision that I will not be continuing my blog for too much longer. It has become one of my favorite hobbies, but I find that I do not have the time I want to devote to it, and in the next couple months, I'll have even less time. It makes me really sad, but I will still be reading all your blogs on my down time!

I'm also sad because this vacation is almost over. That means, it's back to the real world. You know, the job and the stress lol. Time flies when you're having fun.
Posted by Heather at 4:48 PM 7 comments:

Trying to take pictures in a moving vehicle

tank- Walmart, skirt- Forever 21, sandals- Walmart, sunglasses- Walmart, purse- Sag Harbor
Finally made it to Denver! The good news is that the trip wasn't that long, and the weather is very pleasant (as opposed to the oven-like conditions of Texas). I wore this out to lunch with the fam, a movie (Pirates; Johnny Depp is gorg!), and some shopping.

It is SO difficult trying to take good pictures inside a vehicle going 80 mph. It's just impossible! Which is why we pulled over for a few lol. I can't be taken on road trips because I will want to stop as much as possible to take pictures of all kinds of things!

Hope you ladies are having as great a weekend as I am! I am off to do some more shopping! :)
Posted by Heather at 4:36 PM 5 comments:

Perfect Road Trip Outfit
It is finally here! I am leaving for Denver, Colorado early in the morning. I didn't think it would ever arrive...work has been kicking my butt! And I do apologize for lack of posting; I just haven't had the time for anything lately. But I do plan on posting during my vacay - I'll have some downtime to edit my pictures of the day. Above is my "Perfect Road Trip Outfit," which consists of comfy cutoffs, an orange tank, nude flip-flops, and a long sleeve striped top for when it gets chilly in the car. I decided not to pack any heels on this trip because I'm going for total comfort, and we are planning on doing alot of walking! So flats, flip-flops, and sandals are going to be my mainstay!
My Messy Suitcase
Vintage Makeup Case
This is my favorite thriftstore find to date. I love the vintage yellow color, and the little locks in the front work great. It is in such wonderful condition!
Holds all my makeup perfectly, including some lotions and other beauty product underneath this compartment tray.
Handbag Essentials
I'm keeping it simple with a small purse that goes with all my outfits, yet holds all my essentials like my Ipod, sunglasses, Blistex, nail polishes, and my Blackberry.
Road Trip Reads
I guess that is all for now, I am going to relax and catch up on my favorite blogs I've been neglecting!
Posted by Heather at 11:34 AM 4 comments: 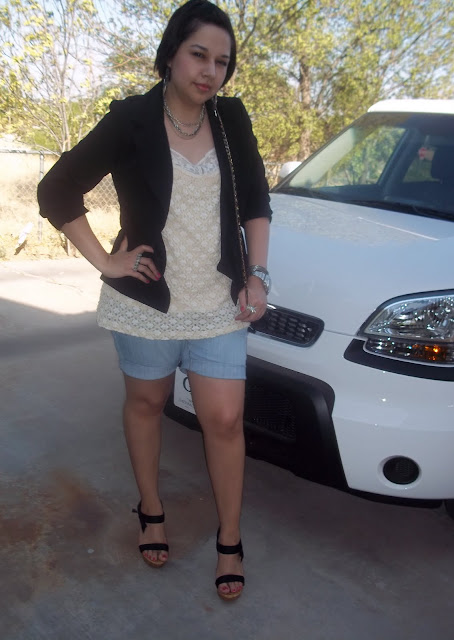 blazer- TJ Maxx, lace top- thrifted, shorts- thrifted/DIYed, wedges- Charlotte Russe, chain bag- thrifted
Sooo....I guess some of ya'll have been dying to hear about my date? Well, I don't want to kiss and tell lol. Just kidding, what's the point of kissing if you can't shout it from the rooftops?? It was AMAZING. This guy is like no guy I've ever dated before! I don't want to get my hopes up or anything, so I'll leave it at that so I don't jinx anything. Oh, and second date is Saturday!

I am just IN LOVE with the shorts/blazer combo this season! It's so sexy with a touch of androgeny. Plus the chain necklace and earrings give it a little rock-and-roll quality. You can't tell from the pics, thank god, but it is 106 degrees (and it was a little after 6 in the evening) - HOT!

Thanks to all the wishes of good luck on my date - it must have worked!
Posted by Heather at 1:02 PM 13 comments:

lace top- gift, brown shorts- thrifted, clutch- WalMart, clogs- Payless
How was everyone's weekend? Mine was okay. I got a new car and a date for this weekend lol. It was too funny though, because my date is going to be the salesman that sold me my new car - pretty cute story. I will definitely post pictures and let you all know how that one goes.

I love this clutch. It has removable straps, so you can wear it as a shoulder or cross-body purse, a wristlet, or a regular clutch. Simple design that can be worn with many outfits. I made the flower ring I'm wearing (kind of hard to see).

﻿I'm just loving the mixing of patterns and fabric here, yet they kind of match in a neutral way.
Posted by Heather at 11:13 AM 10 comments:

Happy Tuesday! Well, hopefully for you it is, because for me, it could be better....I am not feeling too well due to loads of stress at work. But in good news, I've decided to leave my job towards the end of June, then I embark on a 2 week vacation to Denver, Colorado! Needless to say, I'm excited for the summer.

So I decided to post a few pics/instructions on a few DIY projects that I did over the weekend, with my grandmother's help.

First we have denim bangles, which I first saw in June's InStyle magazine.

picture via tedrossi.com
They are so adorable, but at $50+ each, not in my budget, so I figured I would try making my own.

1.) Start with the materials. A piece of denim, scissors, a plain bangle bracelet, and glue (I found that E-6000 Industrial Strength works best).

2.) Cut a strip of denim. The width is up to you, although a thinner piece is easier.

3.) Using scissors, an Exacto-knife, or whatever tools you have, fray the edges of the denim strip.

4.) Starting from the inside of the bangle, add a small dab of glue, and attach the edge of the denim strip.

5.) Start wrapping the denim strip around the bangle, making sure the frayed edges are visible.

6.) After you have glued the end of the strip down, cut excess dangling threads.

7.) Or take it a step further as I did, and add flat-back gold studs or any other extras, such as chain, which was used in one of the Ted Rossi originals.
Another project I did was jazz up a boring sweater. My idea came from this Banana Republic one: 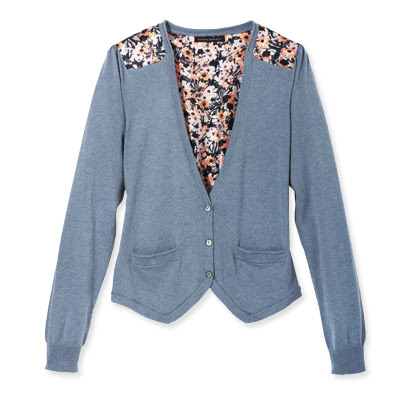 And since I had some flat-back gold studs left over, I decided to embellish some plain Old Navy flip flops.
That's all for right now, but I have a few more DIY projects planned next time I'm off. I might not be posting again for awhile, because I'm going to get uber-busy! But I am still reading your comments and hopefully will have time for my Daily Reads.
Posted by Heather at 7:18 AM 7 comments:

Sweatshirt- Target, shorts- thrifted/DIYed, hat- WalMart, watch- WalMart
Honestly, I put this outfit together at the last minute before going to run errands. My grandmother was like, "Wow, you look California Casual," and I was like, "They dress like this in California?" I guess she knew what she was talking about because I found the almost exact same outfit in a magazine that had something to do with California lol. Anyway, I absolutely LOVE this sweatshirt - so lightweight and soft (it was about 90 degrees here at noon, and I didn't break a sweat). I got two from Target, on sale for $4.95 each. Why didn't I get more????

This purse is thrifted, and it's so cute! I had been looking for a small black purse with a sort of chain-type strap for classy looks, and it is just what I envisioned!

Since it is now SUPER hot outside (i.e., it will reach 104 today), I had to stock up on some summer essentials. I have always LOVED Neutrogena - it is just a classic brand that can never fail. I love the Ultra Sheer Body Mist sunblock because it goes on so sheer (hence, the name), has a very light smell, and the spray bottle makes it easy to reach hard-to-get places (since we all don't have a hot guy to rub lotion on our backs :p ). I also love the Ultra Sheer Dry Touch sunblock for my face. I sooooo hate the greasy feeling that most sunblocks give you, especially on my face! This one is perfect because it seems to disappear into an invisible powder after you rub it in....great if you want to put a little makeup on after. Finally, I cannot stand my hair to be oily. And since I have a habit of needing to be places at the last minute and don't always have time to wash my hair, theres dry shampoo! I have been testing many brands out over the last month, and I have to say that Beyond the Zone's Rock On dry shampoo works best for me. It gives me tons of volume, brushes out super easy, and makes my hair look like I washed it. It's available at Sally's, for around $8. I got the sunblocks from Ulta for $10 each. What are ya'lls beauty essentials for summer?
So I am going to be uber-busy this coming week. A couple of people at work quit, so I will be working major overtime! I'm actually dreading it, because I'm already SO tired, but the extra money will be great since I'm moving. And hopefully I will be getting a new car next month - I'm leaning toward a KIA Soul or a Nissan Cube. We are supposed to be going on vacation at the end of next month, but who knows if my job will be able to let me off. I hope so because I need one bad! Anyway, my point is I probably won't be posting until Friday, which is my next day off.
Thank you SOOO much for all the Birthday wishes....you girls are so sweet!!!!!!
Posted by Heather at 8:12 AM 6 comments:

Heather
Lover of makeup and beauty and making yourself happy even if it takes forever!